The recursive neural network in this work is based on Socher et al. (2011), where it was used for sentiment detection. The idea of semantic composition is that the meaning of a sentence or text is composed of its smaller subparts, and recursive neural networks aim to model this by recursively combining vector representations of words and phrases.

We represent each word as a vector of length d. We can then construct a network that takes two word vectors, concatenated into a vector of length 2d, as input and outputs a new vector of length d. We can then stack these networks together and use the output of one network as one of the inputs to another network. This way we can combine multiple words to phrases and phrases to sentences. We don’t need to have a separate network for each of these levels, and can just reuse the same network each time – which is why these are called recursive neural networks.

Mathematically, the composition happens as follows:

\(x_a\) and \(x_b\) are the vectors for the two input words/phrases; \(x_c\) is the output vector; \(W_L\) and \(W_R\) are the weight matrices for the left and right input; \(b\) is the bias vector. If we think of the input as a concatenation of the vectors, this formula actually becomes the traditional single-layer neural network:

An example of this recurrent neural network in action is shown below: 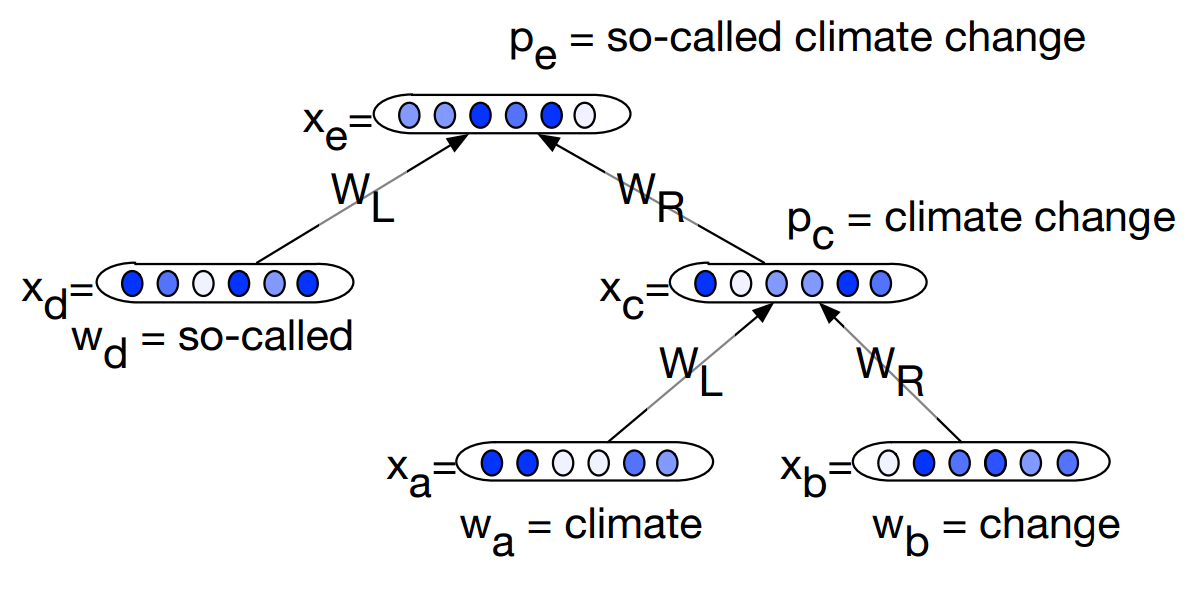 During training, an additional softmax layer is added on top, which calculates the probability for both classes (liberal or conservative). The model is then trained to minimize the negative log-probability of the correct class, with L2-regularization.  The error is backpropagated through the whole tree, so the information on the sentence level will be used to modify the individual word vectors, along with all the weights used in the composition.

Also, if I understand the paper correctly, the final prediction from the model at test time is actually generated by averaging vectors for all the nodes in the sentence tree, concatenating this with the root vector, and training a separate logistic regression model over that. Which seems a bit odd, because the recurrent network is quite capable of predicting the class label on the root node, and has been optimised to do so. I wonder what the performance difference would be, if the root-level predictions from the RNN were used directly for evaluation.

The authors use two datasets for evaluation:

Both of these datasets are originally annotated on the level of the author and their political views, but this information can be used to also label each sentence with its most likely political class.

On both datasets, the authors apply heuristic filters to only keep sentences containing explicit bias in either direction, and remove neutral sentences which take up majority of the corpora. However, as this filtering is based on surface forms (essentially bag-of-words or bag-of phrases), it is unknown how this affects the final dataset. It would be interesting to also see results where the test set contains all of the original sentences.

The authors compare a number of different models.

The results (accuracy) can be seen in the graph.

Some conclusions we can draw from the results:

Thomas, M., Pang, B., & Lee, L. (2006). Get out the vote: Determining support or opposition from Congressional floor-debate transcripts. In Proceedings of the 2006 Conference on Empirical Methods in Natural Language Processing – EMNLP ’06 (pp. 327–335).