As the first step, we need to create feature vectors for each word in our vocabulary. The two main ways of doing this, which are also considered by this paper, are:

If you want to learn more details about these models, take a look at an earlier post about comparing both of these models.

We have the vectors, but how can we find the correct words in the analogy task?

The idea of Mikolov et al. (2013) was that the vector offset of vectors should reflect their relation:

We can rearrange this to find d:

Therefore, we can calculate the vector for \(c – a + b\), compare it to the vectors of all words in our vocabulary, and return the highest-scoring word as the answer.

I’m using \(d_w\) here to denote the actual word, whereas the \(d\) stands for the vector representation of \(d_w\). \(V\) is our whole vocabulary. \(cos()\) is the cosine similarity between two vectors. Let’s refer to this as the addition method.

An alternative to this is to consider the directions of the offset directly. We find the word that has the most similar offset (in terms of direction), compared to the offset of the sample words.

It only looks at the direction of the relational step, ignoring the actual magnitude of this step. We’ll see later that sometimes this is good, sometimes not so much. We’ll refer to this method as direction. Apparently this method was actually used by Mikolov in some experiments, although it wasn’t included in the paper.

Now onto the modification proposed by Levy & Goldberg (2014). The addition method basically looks for a word that is similar to c and b, and not similar to a, with each contributing equally. This can lead to cases where one large term dominates the equation, especially if the magnitudes of the similarities are very different. Therefore, the authors have proposed that instead of adding these similarities, they could be multiplied:

If the vectors are normalised (unit length), then this formula actually becomes a multiplication of their scalar products:

\(\epsilon\) is set to 0.001 to avoid division by zero. Also, the formula doesn’t handle negative similarity scores, whereas cosine (and the scalar product) can be negative. Therefore, the values are transformed into a positive range by doing \(x_{new} = (x + 1)/2\). We’ll refer to this as the multiplication method.

The alternative methods are evaluated on the task of analogy recovery, using three different datasets:

In the MSR and GOOGLE datasets, the system needs to find the correct answer from an open vocabulary. In contrast, the SEMEVAL task provides candidates for each relation that need to be reranked. Accuracy is used as the evaluation metric on all datasets.

The word vectors were trained on 1.5 billion words of English Wikipedia. The vocabulary was restricted to contain only words that occurred at least 100 times in the corpus, resulting in 189,533 words. 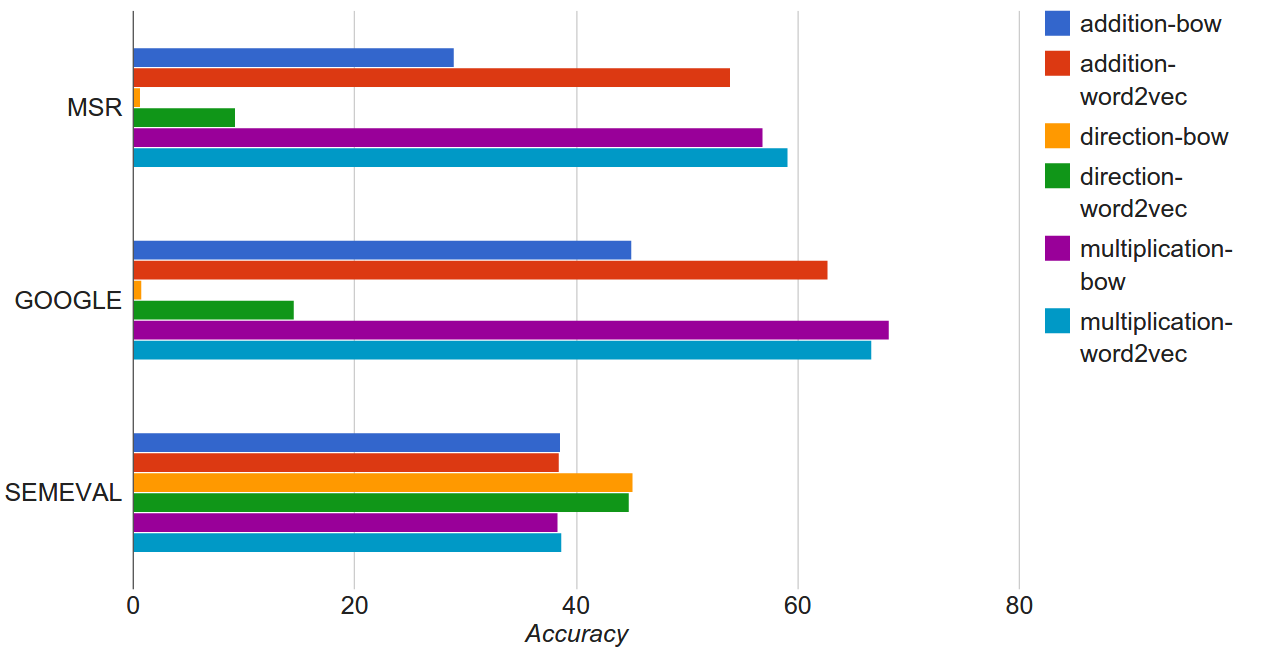 Some observations based on the results:

Based on my experience with applying different vector operations to discover linguistic regularities, I’d like to point out two observations.

First, while the ability to recover semantic relations in such a way is remarkable, it is not quite as impressive as it seems at first glance. Let’s take the well-known example of king – man + woman = queen. Depending on the parameters I used, several vector spaces I built actually gave queen as the most similar word to king, with no vector operations needed. This makes sense, because king and queen are semantically very related, and probably occur in very similar contexts. But it also means that (woman – man) only needs to be a zero vector or some small random noise in order to give the correct answer. I’m not saying this is a major factor in these experiments, but I would encourage future work to also report baselines without using any vector operations.

Second, I observed that the quality of these regularities highly depends on the examples that are provided, and how they relate to the query word. For my work (Rei & Briscoe, 2014) I looked at hyponym relations, and below are some examples when trying to find hyponyms for bird.

The greyed out terms are the query terms, and it is common practice to ignore these in the results; the bold results are correct answers. As you can see, just the plain vector similarity returns one bird species correctly in the top results. When using (salmon,fish) as the example pair, the system is quite good and returns a whole lot more. But as I start to use hyponym examples from other domains, the quality degrades fast, and (bird-treatment+therapy) actually returns worse results than the basic vector similarity.

I believe there is still plenty of space to further improve out understanding of how we can operate on various types of features, in order to model different semantic relations and compositional semantics.

Levy, O., & Goldberg, Y. (2014). Linguistic Regularities in Sparse and Explicit Word Representations. In Proceedings of the 52nd Annual Meeting of the Association for Computational Linguistics (pp. 171–180).